Apogee Duet vs Apollo Twin: Which Audio Interface is Better? 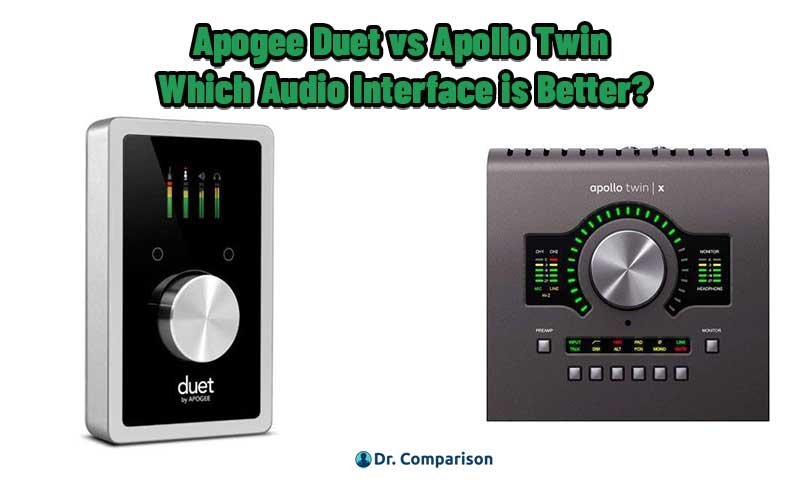 Audio interfaces are designed to enhance the audio capabilities of your computer. The sound difference of your recordings can be huge with a much fuller range. Even when not recording, you may want to consider an audio interface to connect speakers and monitors to have better control over the sound quality.

We are going to look at Apogee Duet, which has been played a key role in numerous GRAMMY winning records and the professional Apollo Twin. We will compare their key features including the technology and software that they have. We will add a comparison chart for quick viewing and some pros and cons of each before deciding which is the better buy.

There are a few similarities between the Apogee Duet and the Apollo Twin, so we will begin here.

Here is a quick recap of their features.

Both the Apogee Duet and the Apollo Twin are ideal for any musical project from the initial recordings to putting on the finishing touches to your songs. They can also be used for mixing

You can use the Apogee Duet and the Apollo Twin for A/D and D/A conversion analog-digital/digital-analog). The maximum recording capability of these audio interfaces is up to 192KHz/24-bit.

Now, let’s focus on what makes the Apogee Duet and the Apollo Twin different.

These audio interfaces are small enough to be portable and both look smart and modern.

This is the smaller audio interface at 6.3 x 4 x 0.8 inches. It weighs just 1.1 pounds and the overall design is very eye-catching.

The Winner Is- The Apogee Duet

What you need to connect to the audio interfaces is probably one of the most important things to consider.

There are 2 analog inputs, a combination line-balanced +20dBu max. You will also find 4 analog outputs, balanced lines, headphones, and speakers.

In this case, you have 3 analog inputs, 2 XLR/TRS combos, and a ¼” jack. There are also 8 channels via optical connection. For the outputs, there are 4 analogs ¼” jacks.

The Winner Is- The Apollo Twin

Again, another important decision will depend on the operating system you use.

This has been designed for Mac users in mind, that being said, it is also compatible with Windows 10. To connect to your device, it requires a 2.0 high-speed USB.

This might be a personal preference but there is a difference in how you operate the audio interfaces. 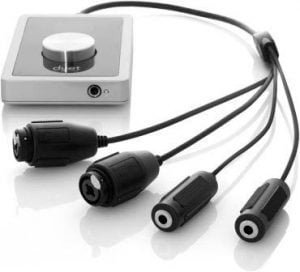 It comes with a full OLED display. There is a dial knob in the center and two touchpads, one either side of the dial.

The dial knob is in the center with buttons underneath. There are LED indicators around the dial and above the buttons.

The Winner Is- The Apogee Duet

The final big decision is how easy the user interface and software are to create your music projects.

With Apogee Soft Limit, the audio interface stops the clipping before it gets to the A/D converter which can cause distortion by rounding of peaks. It also allows for more decibels of apparent level when recording.

The industry standard Luna Recording System is one of the fastest environments for music production, editing, and mixing.

Before the final decision, we will take a look at some pros and cons of the Apogee Duet and the Apollo Twin. 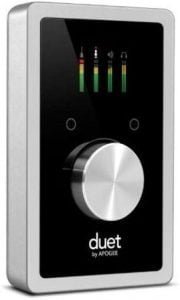 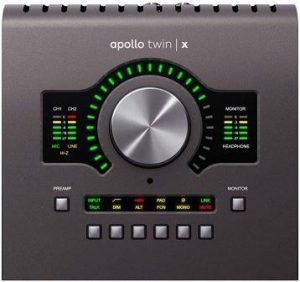 There is no doubt that both the Apogee Duet and the Apollo Twin are absolute game changers when it comes to music production. The quality of sounds is completely elevated, and the range of functions is amazing. In this sense, you can’t go wrong with either.

We decided that the Apogee Duet was the better option, and this was mainly down to two reasons. The price tag was far more attractive, in some offers almost half the price. Also, the design, overall look, and touchpads made the Apogee Duet better looking and nicer to use.